Advancing counselors' effectiveness by exploring and sharing strategies through teaching, research, and supervision

The process and practice of career exploration for young adults

What's happening in our association

Career development works in business/industry, agencies, government, or any of the variety of areas of practice.

Short lessons on some of the newest technology tools, trends, and apps link

Navigating the Transition Wilderness: a Model for Coaching Veterans and Other Humans

One of the most ubiquitous tasks of career counselors, coaches, mentors, and others in the helping professions is to support clients, advisees, staff, colleagues, friends, and family members through the myriad of adult life transitions. Fortunately, career professionals understand much about life transitions as evidenced in this summary by Anderson, Goodman, and Schlossberg (2011):

However, the challenge is to translate intellectual insights and models into something that makes sense to those we aspire to help. Still Serving Veterans (SSV), a 14-year old, Alabama-based, non-profit helping Veterans and transitioning military find meaningful work, draws on the transition model formulated by William Bridges (1991, 2001, 2009). As George E. O. Box famously observed, "essentially, all models are wrong, but some are useful" (1997, p. 424). Bridges’ transition model, adapted for diverse audiences, is one of those “useful” models.

Bridges suggested that transition was a three-phased process of psychological reorientation. These phases included a time of "ending, losing, letting go," followed by a "neutral zone" where the old structures have loosened their grip and the new structures are yet ill-defined, and finally, "the new beginning". Figure 1 is the adaptation of the Bridges’ 2009 transition model used to communicate more directly with the Veteran audience.

Bridges labeled the liminal time between loss and beginning as “the neutral zone,” a term he adapted from Dutch anthropologist, Arnold van Gennep’s writings on rites of passage (Bridges, 2009). However, in common usage, the word “neutral” belies the often disorienting and unsettling sensation of being adrift which characterizes this phase of transition (Bridges, 2009; Armenta, 2019). Therefore, SSV speaks of the “wilderness” which better resonates with Veterans and a term Bridges himself used when he said, “the neutral zone is like the wilderness through which Moses led his people” (Bridges, 2009, p. 43). 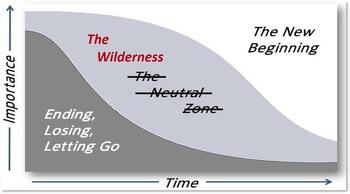 While transitioning military are given the opportunity to attend a formal Transition Assistance Program (TAP), the content is generally informational and focused on benefits, financial management, and the mechanics of job seeking. However, there is little discussion (or warning) of the psychological process of leaving the military (and its honorable mission, shared values, known structures, and ready-made tribe); wandering around in uncertainty; and, then negotiating an unfamiliar cultural terrain of the civilian workplace. When individuals are introduced to Bridges’ transition process, they come to realize that, while the details of their experience are unique, the process itself is predictable, normal, and manageable. .

While each phase of Bridges’ transition process has a unique set of teaching points, one of the most important for transitioning military and Veterans is the “ending, losing, and letting go” phase. SSV emphasizes two key themes. First, the process of letting go is selective. Veterans are justifiably proud of their often hard-won abilities to:

However, in order to be successful in the job search and new civilian life, transitioning military and Veterans must give up and let go of:

The process of letting go of a familiar life and lifestyle is often very difficult for Veterans. However, when they understand that they are not being asked to “give up everything” they have worked and sacrificed for, they are better prepared to enter the wilderness of the neutral zone.

The second major teaching point is that the “ending, losing, and letting go” phase is often associated with strong emotions. SSV uses the traditional Kuber-Ross’ (1969) model of grieving which may include the elements of denial, anger, bargaining, and depression, while acknowledging that these are just exemplars of the range of potential emotions. The military culture does not encourage the expression of emotions, so clients often express relief in hearing that the “emotional rollercoaster” they are experiencing is normal and part of the process. They are not “crazy” and they are not alone.

While SSV’s mission is focused on Veteran career and transition services, career professionals may be asked to speak about transition to broader community and professional audiences. In every audience, regardless of age, gender, ethnicity, education, socioeconomics, or military service, members of the audience nod in recognition as they hear of the challenges and emotional nature of the very human process of transition. We often experience multiple and simultaneous transitions – transitions in work, relationships, health, and life role. To understand that transition is a process with predictable phases and challenges is reassuring – not just for Veterans but for everyone. Yes, William Bridges’ three-phase model of transition is indeed one of those “useful” models!

Paulette Risher is a retired Air Force civilian organizational psychologist and Army Major General.  She currently serves as the President/CEO of Still Serving Veterans, an Alabama-based non-profit which provides career and transition services to Veterans and transitioning military.  Prisher@ssv.org and Paulette@Learningforthejourney.com

Paulette--Thank you for this application of Bridges' work to veterans. I've used Bridges' model (and Schlossberg's) for many years for people in career transition and have found it does indeed resonate with so many and that it helps normalize the process and support them in this transition. I like the way you apply it to some of the unique challenges of vets. Thanks again. Sue

Very useful article written in a very practical way.
I have been using Bridges Model for some years and replacing the neutral zone by wilderness zone makes all sense to me and certainly will do to my clients. Thank you very much. Diana

Working with transitioning servicemembers on a daily basis, I have seen the transition you speak of quite often. I like the idea of the "The Wilderness" rather than "The Neutral Zone." I thank you for your service and thank you for your continued services to the military community.