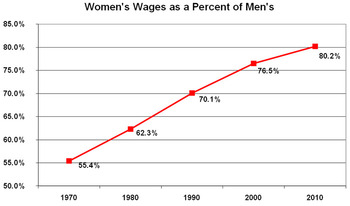 The labor force has experienced dramatic changes from the female perspective in the last 40 years. The table on the right, which compares the median income for all men who worked full time to that of all women who worked full time, shows steady progress for women. Women earned 55% as much as men in 1970 and earned 80% as much as men in 2009. What has caused this progress and can the gender gap be expected to close? Are gender differences in the workplace disappearing?

As women began to enter previously male-dominated occupations in the 1990’s, researchers looked for nuanced reasons for the persistence of the wage gap. MacPherson and Hirsch (1995) believed that skills and preferences account for the wage gap. Boraas and Rogers (2003) determined that differences in compensation between men and women within the same occupation were primarily related to education and age. Gabriel and Schmitz (2007) concluded that, by 2001, pay differences between men and women resulted from voluntary choices. However, some researchers question the conclusion that observed differences are voluntary. Hill (2002) points out that many factors (such as balancing family demands and income needs) cannot be discerned from statistics collected by the U.S. government.

Economists often cite the human capital theory to explain the wage gap. According to Bielbly and Baron (1986), this theory explains that men and women choose to specialize in different jobs due to differences in family demands and training choices. Even when men and women choose the same occupation, women may have less training or experience and may spend less time in the labor market. Current Population Survey (a report published monthly by the U.S. Census Bureau)

Educational attainment is another important factor in compensation. How do women compare to men in terms of the numbers of degrees earned? The graph at the right shows 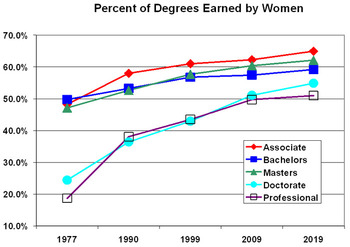 that, in 1977 (the earliest year for which this data is available), women earned close to 50% of the Associate, Bachelor, and Master’s degrees, but a small percentage of higher degrees. By 2009, women predominated at all degree levels and projections to 2019 indicate that the feminization of higher education is expected to continue.

So have occupations become more gender balanced? The 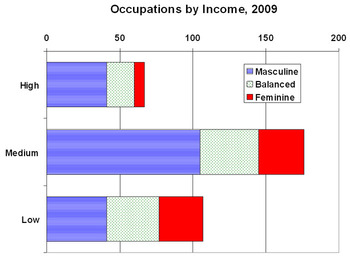 To better understand the current wage gap, recent studies have identified more specific data sources. One study indicates that starting salaries offered to female physicians in 2008 were 83% of those offered to male physicians (Lo Sasso, Richards, Chou, and Gerber, 2011). Ceci and Williams (2010) looked closely at the underrepresentation of women in science and concluded that women choose slightly more family-friendly paths, and small differences early in a career led to significant differences in salaries as their careers progressed. A friend who is a professor of astronomy developed an index to measure academic “success” based on the number of first-author publications, all publications, citations of the scientist’s publications, and number of years of post-graduate work experience. When he compared male astronomers to female astronomers, he found a significant compensation gap which could not be explained by this index. In the annual comparison survey published by the American Association of University Professors (2010), this discrepancy is also evident. For example, among faculty with a doctoral degree, women are paid 78% as much as men. Even for those women who have achieved the status of full professor, the wage gap is 91%. Universities would seem to be enlightened employers, but even there we see a wage gap.

Clearly, women have made great strides toward achieving parity with men in the labor force during the last 40 years. Women now form a larger share of the labor force and are now found at all income levels. However, the majority of occupations are still sex-segregated. While the percentage of women in occupations that pay higher salaries has steadily increased, there is still a noticeable wage gap between men and women. The wage gap shows evidence of persistence.

American Association of University Professors (2010). No Refuge: The Annual Report on the Economic Status of the Profession 2009-10. Academe, March-April (available at: http://www.aaup.org/AAUP/comm/rep/Z/default.htm)

Bureau of the Census (1970). 1970 Census of the Population Supplementary Reports. Author (available at: http://www.census.gov/prod/www/abs/decennial/1970cenpop_pcs1.html)

Marilyn Maze, PhD, is a Principal Research Associate in the Career Transitions Research Department of ACT, Inc. At ACT, she guides the development of the DISCOVER online career guidance system and works on other occupation-related research activities. She is also Treasurer of the Maryland Career Development Association and Feature Editor for Career Convergence. She can be reached at mazemd@hotmail.com.

Thanks for the very interesting article, Marilyn. I appreciated all of the data and studies. Before I got to your second-to-last paragraph, I was already wondering how big of a factor initial offers and negotiations play. I would love to see more HR data based on those two things - do the initial offers for the same job and same applicant qualifications differ based on gender and if so, why? and do men tend to negotiate for higher salaries than women?

In my personal experience, I have seen a difference in how men and women negotiate, express their value, and ask for what they want. As a female, I learned pretty early that I needed to hone my negotiation skills, ask for what I want, and not be shy about speaking up for myself and the value I offer. It has literally paid off!

I am glad you found this article worthwhile. The data on negotiation is difficult to find because the surveys have, until now, be designed to look for more obvious differences. If you find it, let us know.

While women have made some gains in the white collar world their status has been virtually unchanged for the 30 years data has been gathered for the high paying skilled blue collar trades. According to Department of Labor data women currently are 1% of electricians, 1.5% of carpenters, .4% of brick masons, 1.4% of pipe fitters and .9% of steel workers. While men of color haven't achieved parity their numbers are 4 to 10 times these percentages. For excellent information on this problem and what can be done about it go to www.prideandapaycheck.com. This is a very good article but more attention needs to be paid to the whole world of work. Since women make up about 85% of single parent households if we want to improve the economics for children we will work to open the doors to the skilled trades through counseling, advocacy and support.

Thank you for sharing this research and information. In order to get a deeper perspective on pay disparity of men and woman we, unfortunately, must delve into motivations behind discriminatory practices.

I was raised in a home where I was exposed to teaching and modeling of equality. All of my working and educational life I encountered little gender discrimination – until I was in mid-40’s, working in an upper level management position. Females did not last more than two years in a “leadership” role with this company – a fact I did not know until after I was hired. No matter what I did; no matter what I achieved; no matter that my hours per week exceeded every male by about 15 to 20 hours per week – I was still treated as if I were “less than.”

It was a startling and disheartening wake-up call for me when I had to admit that I had fallen into the ranks of women who are demeaned and treated differently by their male supervisors. The discrimination was so subtle and often took place behind closed doors, privy only to me and the group of male “leaders”, with the elder male supervisor setting the tone.

Since this experience I hold fast to the belief that pay disparity is only a symptom of a social disease rooted in discrimination.