Lee Richmond is a professor emerita of Loyola University Maryland, and a principal of PsyCoun Consultants, an organization that offers continuing education to counselors. She has long been involved with NCDA and ACA, having served as past president of both, and member of the CACREP board, the insurance trust and NBCC. Early on, Lee was involved in the credentialing of career counselors, and later in the credentialing of career development facilitators. Her published works relate to the connection between spirituality and work, cross cultural counseling and women’s issues. Lee has been a lifetime member of the American Psychological Association of and the Maryland Psychological Association. 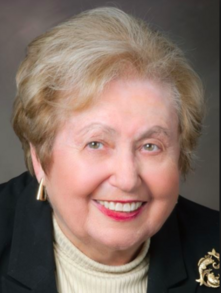 This is the 6th interview within the Career Convergence series on experienced NCDA leaders as they offer insights about their “later chapters” and navigating a lifetime of transitions. This project hopes to add to the knowledge base of ageless aging, transitions, and questions critical to developing career development leaders.

What helped you to gain your voice within the field?

Gaining a voice within the field was gradual and not something I set out to do. My early interests were in history, literature and philosophy. After a few years of teaching I saw the many cognitive and emotional health needs of high school students. I decided to become a school counselor first and later a counseling psychologist. The only voice that I cared about was that of compassion, understanding, and hope. After many years on professional boards and being elected to national offices, I could give audience to the voices of many who sought development, diversity and dignity in our profession and wider world.

Alejandro Rodriguez, MD, chief of pediatric psychiatry at the hospital wing of the Johns Hopkins University, provided an internship where he taught by word and example how to do therapy with young people. A second person of influence was Dr. Katherine (Kitty) Cole, a woman who rose above racial innuendo to the presidency of NCDA in 1981. She encouraged me to run for a board position, which I did and became president in 1988. The third was Dr. Thelma Daley. As APGA president, I observed her standing at the podium. I thought that if I could ever be like anyone, I wanted to be like her. She was behind my nomination for later becoming the ACA President. These three people had in common not only the intelligence, sense of purpose, and the drive shared by born leaders, but also a humanness and a caring for others that was both palpable and contagious.

To what degree have you lived a life following what you professed about career development principles?

What I have professed about career development is that life itself, not a job, is one’s real career. It is very important to try to live with purpose, drive, trust, faith in the good, and gratitude for each breathing moment.

Each must be concretely and separately considered.

Fear is natural in some circumstances. So is self-doubt. I have learned not to feel guilty or shameful when I experience either. I try to examine what event is at the root of my fear and/or doubt, and what I tell myself about that event. In brief, I try to be rational, but I am not always successful.

Confidence and power are another story. I generally live with faith in myself and my decisions within the bounds of being loyal to family and friends.

I see power as a fleeting thing. Power can be good, if it is the power of knowledge, wisdom and/or love. In most circumstances “power-over” is not a good thing especially if it is power over another adult.

I have passed on flying an airplane, studying to be an artist, living in Chicago, taking private Hebrew language lessons, staying as a community college teacher longer than I stayed, remaining at Johns Hopkins University when I took the job at Loyola. I don’t regret any of these things.

Deciding whether to choose growth or safety has been a theme throughout my life. When I was much younger I would usually choose growth. I did so when choosing to get a doctorate when I had four children and a disgruntled husband at home. I chose it when I left a high paying job as tenured full professor and division chair at a community college to start all over again as lower paid non-tenured assistant professor at a university. Not without some struggle, my choices for growth worked out well. Today, however, maybe too often (but not always) I opt for safety.

What are your thoughts about what’s ahead for you?

I am mother of four married children and the grandmother of eleven and an immediate family of 28, so I am expecting many family events and celebrations in the future. I hope never to stop doing workshops and taking brief excursions into the classroom. I intend to go back to enjoying literature, writing poetry, taking a painting class and doing some serious study of periods of history. I also intend to make a success of a counselor’s institute that some colleagues and I started.

How is your biological clock impacting your choices?

There is not enough time left in life to do everything I want to do. Recognizing physical limitations, my biological clock tells me that even though there is a rush to get things done, slow down. Pace yourself. Find humor in daily activities and age consciously.

What advice do you offer your younger self? What’s the most critical advice you want to share with new professionals in our field?

To new professionals in the field my advice is be unafraid of the future, to experiment with new ideas and things. I would tell them to be serious about their life-career, but not too serious. Make room for serendipity and be open to surprise.

What one sentence would you use to describe the legacy that you hope to leave to the field?

Thank you to Dr. Richmond for sharing her story, and thanks, Rich, for writing this piece. "Continue to connect spirit with career" -- Love it!